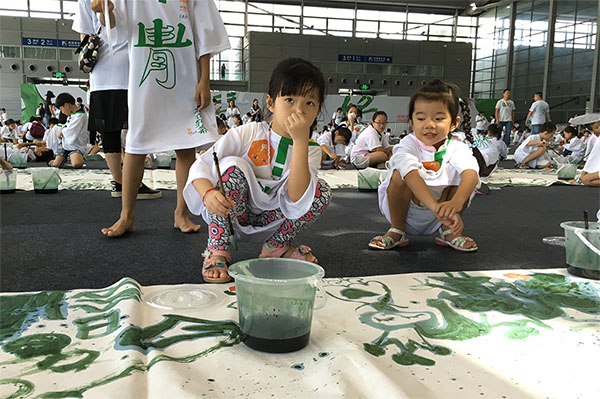 Several of the 1,500 children taking part in ‘A Story of Qinglu Shanshui’, an art performance held at the Shenzhen Convention and Exhibition Centre in September, held their noses as they painted with algae water provided by artist Gu Wenda. They described the smell, which intensified as the performance went on, as like “soup”, “mushrooms” and “stinky farts”.

Gu, who splits his time between Shanghai and New York, is one of China’s most prominent contemporary artists. Many of his past projects have used off putting materials — human hair, tampons, placentas and sperm — but this performance marked a shift away from natural emissions towards unnatural environmental impacts. Fertiliser runoff from intensive farming has led to algal blooms choking the life out of many Chinese lakes and rivers.

“I’ve seen the algae overgrowing in Taihu, and the government spends a huge amount of money every day to clean the lake,” Gu says. “But you cannot control the farmers putting too much fertiliser in the land.”

Clarissa Wei, a freelance journalist who covers food for Munchies, the LA Times and others, recently travelled to Taihu, a lake near Shanghai, known for the Three Whites (太湖三白): Oriental whitebait stir-fried with egg, steamed river fish with soy sauce, and white shrimp with ginger and scallions. When she arrived, she says, “there were no signs of life.”

“I learned that Taihu had long been a victim of extreme pollution and was briefly the poster child for China’s environmental woes. In 2007, an algae bloom at the lake left more than two million people without drinking water for a week. A nasty stench horrified nearby residents and the lake turned a glaring fluorescent green. It’s ironic: The province of Jiangsu, where Suzhou is located, is marketed heavily as ‘the land of fish and rice’. Hell, I had marketed it heavily as the land of fish and fish. I was eating fish from dirty waters, and ended up seeing the entire lake fenced off and dead.”

While air pollution and desertification are among the most visible signs of China’s environmental degradation, the ill health of its water sources is perhaps its most pressing challenge. In an article entitled ‘Rural Water, Not City Smog, May Be China’s Pollution Nightmare’, The New York Times reported statistics released by Beijing earlier this year: “More than 80 per cent of water from underground wells used by farms, factories and households across the heavily polluted plains of China is unfit for drinking or bathing because of contamination from industry and farming.”

“China is still a developing country and their priority is making money, not saving the environment,” Gu says. “There are almost 1 billion farmers here. They’re not educated and they’re still very poor. Very poor! People talk about luxury goods in China. It looks like people have money but it’s only in the big cities. That’s it. You go a little further — if a little girl has to walk two hills to go to school, she’s already lucky.”

Gu’s algae approach derives from a classical tradition in Chinese art. “Qinglu shanshui hua (青绿山水画) is a school of green and blue landscape painting,” he says. “I connected this with green algae water to make a connection between the scholarly tradition and our contemporary experience.”

The algae water has two distinct hues, the forest green of the algae powder and the pale blue rinse it leaves in water, similar to the two hues found in qinglu shanshui. “It’s just like old ink,” Gu says. “There are two flavours.”

While qinglu shanshui celebrates nature, Gu’s work questions our use of ‘green’ as a synonym for ‘environmentally friendly’. Algae is not inherently problematic — it’s so nutritious people use it as a supplement — but the specimens that inspired the work grow in chemical fertiliser that washes into fresh water. “For the performance I had to avoid that material,” he says. “Parents won’t let their children touch polluted water. So it was produced in a laboratory. It’s clean but it still has a very strong smell.”

“You have a lot of fun with kids participating, it’s positive and educational. But on the other side contemporary art is not always safe — it can be disgusting. That’s why a lot of parents don’t want to expose kids to contemporary art, especially in China.”

The fragrance surprised Gu, proving an even more powerful communicator than the pigment. “When it was still in the containers I couldn’t really smell it. After the kids finished painting the whole hall had a smell, and that’s part of the work. I think the smell performed wonderfully, and the kids will talk about it — what is this smell?”

Gu’s performance was commissioned by Ping’an, China’s insurance behemoth, ranked 181 on the Fortune 500. Gu will create a work using the children’s paintings to help promote the 115-storey Ping An International Finance Centre (PAFC), the fourth tallest building in the world, scheduled to open next year.

“People think kids are the only participants, but they’re not. Corporations are also participating by providing a platform. And we have to be examined by the government. It creates a lot of difficulties but I feel happy because it extends my ability. In the past you only had a dialogue with yourself, creating a work silently in the studio.”

Gu says that for the past 30 or 40 years Chinese companies focused exclusively on making money, but now they’re ready to support culture and make more meaningful philanthropic efforts. Ping’ an donated 1 million RMB to help provide clean water to remote schools as part of its collaboration with Gu.

“When I left China [30 years ago] there was no such concept. But paper companies, tobacco companies, they create a lot of pollution, so they have to be responsible on the other side as balance.”

Projects such as Gu’s, which is implicitly critical of China’s environmental policies and enforcement, are challenging for companies here to support, as there may be real business implications for offending the wrong government agency. But Gu says powerful corporations are also much better placed to negotiate with officials than any artist.

Gu has also designed a 16 metre-long coi fish — another biological invader, which he says “means money” in Chinese — for the PAFC’s lobby. The structure is modelled on the hull of Zheng He’s boat, and each scale is an LED screen. All up, he estimates it will cost over 3 million RMB to produce.

The fish includes an antennae for receiving public inputs. Allowing people to upload their own content to the fish is a wonderful idea, but it means releasing control and embracing chaos, something corporations and governments are often averse to, but Gu enjoys. “Art always has this part; it makes things more interesting.”

Ink painting itself is quite chaotic. There’s no knowing exactly where the ink will go, and it’s difficult to hide strokes once they’re made. It’s not oil painting, where imperfections can be hidden, nor digital art, where every pixel can be perfected. Set loose on vast expanses of rice paper, some of the kids in Gu’s performance kicked over buckets of algae onto the paper, walked on it, enjoying moments of selfish pleasure even when they threatened others’ creations. It’s a microcosm of the great environmental challenge: constraining behaviour that benefits at an individual but harms a community, a country or a planet.

For his next project, Gu is going even bigger. He’s asking thousands of children to sign 25,000 lanterns, transforming Shanghai’s Minsheng 21st Century Art Museum into an urban volcano.